I’ll bet you that every country in the world, in some shape or form, has been following or at least seeing updates on the US presidential election. Italy is no exception. If I watch the italian news every I’ll hear “italian italian italian Donald Trump italian italian Hillary Clinton,” etc. If I look through a newspaper or magazine, somewhere in there I’ll see something regarding the US election. When people learn I’m American they ask me who I am for, the list goes on and one, point being that the world is eating up this disaster election just as much as the American people.

I attended a debate watch at my italian university, Bocconi, consisting of mainly people from a television class offered there, but open to all others who wanted to join. Due to the time difference we were there at 3am (yes that early in the morning) to watch it live. I observed the reactions and comments that the other students, mostly italian, were making. Some had beers in their hands, and as you can imagine, they were a little more vocal. The class also created a twitter account where students could log in and tweet comments and quotes along with retweeting other twitter users and media accounts. You can check out their full twitter page here.

These are some of the observations I made and responses that I heard.

“I have tremendous respect for women.” – Donald Trump. Everyone laughs.

Similar to the young generation in America, most of them think Trump is absolutely ridiculous. They’re laughing and jeering at some of what he is saying (followed by a “Silenzio!” by the professor).

“Because you’d be in jail” – Trump towards Clinton. OHHHHH, Everybody knows she just got burned.

Also similar to Americans: they don’t particularly like Clinton either. Most (well everyone I’ve talked to) have told me they would much rather have Clinton than Trump, but they still question her trustworthiness and character.

The first sounds of anger from the audience came when Trump stated that “Obamacare is a disaster.” One guy in the back yelled some obscene words as Trump carried on his speech about american healthcare. In regards to Italian healthcare, from what I know at least, it is similar to the rest of Europe and is free or very low-cost in the public sector. Maybe this young man was a fellow american, maybe he just really hates the direction America is taking.

Things got more heated as more beers were drunk and as the debate got fiery. Trumps stance on Muslims and the Iraq War caused a few more obscenities and “you’re crazy” to be fired out from the audience. When Donald started his rant on “extreme vetting,” someone yelled out how we need some real-time fact checking DURING the debate. I talked to someone who told me that they are sick of Donald deflecting the question and going straight for ISIS. This subject is especially touchy for european citizens, who have to bear most of the weight of middle eastern refugees, also combined with the increased security due to recent terrorist attacks. Just this weekend walking around in Milan I saw more military soldiers than normal (all holding their large automatic weapons), and I wondered if there was any sort threat they might be preparing for. It’s hard to keep up with middle eastern affairs, especially with how complicated everything has become.

It’s also been interesting to hear some things the candidates say and compare them to how things work in Italy. For example a candidate said “Jobs (in America) are nonexistent.” I talked about this with some italian students just the other day, they told me it is very hard to find a job in Italy. One of them, who was an international student from America (not on exchange) agreed with them and said it is way easier to find places that are even just hiring in America than in Italy. I feel like finding a job in America isn’t too difficult, you just need the skills to actually be hired for it. I think I’ve seen only 2 signs related to hiring or jobs while here in Italy, although I’m not fluent in italian so maybe I passed over a few without knowing.

Another question that got me thinking was NAFTA, or the North American Free Trade Agreement. Trump keeps talking about how it is the worst trade agreement in the world, but does the world even know what it is? Does it really affect them? Can it be labeled as a world issue? I asked a student if she knew what NAFTA was, she didn’t, so I provided a brief explanation.

“No I don’t know what NAFTA is or why it is such a big deal. From what you told me, I don’t really think it affects us here in Italy or the rest of the world.”

For more on NAFTA, check out Politifact.

The twitter account had a poll asking who they thought was winning, there were only 9 votes, but it does show who is favored in this US election.

One of the students I talked to mentioned that Italy had their own “Donald Trump” figure a few years ago. Silvio Berlusconi, he was the 50th prime minister of Italy and in office 3 separate times for a total of 9 years. Some basic facts about him from Wikipedia: “Berlusconi was Prime Minister for nine years in total, making him the longest-serving post-war Prime Minister of Italy, and the third longest-serving since the Italian unification, after Benito Mussolini and Giovanni Giolitti….Berlusconi has been involved in many controversies and over 20 court cases during his political career, including a conviction to 4 years prison and 5 years suspension of public functions by the Court of Appeals for €7M tax evasion (and €280M slush fund) on 8 May 2013, confirmed by the Court of Cassation on 1 August 2013….. According to journalists Marco Travaglio and Enzo Biagi, Berlusconi entered politics to save his companies from bankruptcy and himself from convictions.” Read the rest of the wikipedia article here. 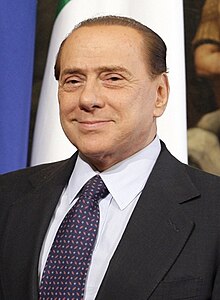 With more research I found several articles comparing the two figures and also outlining italians’ feelings towards the US Republican Candidate.

This one from TheLocal IT, “Italy’s News in English,” talks about how both Donald Trump and Silvio Berlusconi, are non-politicians who appeal to those who want change in how their government works. Berlusconi owned a lot of media in Italy, allowing him to be in everyone’s homes and promote his new party, Forza Italia. Other similar attributes between the public figures include: Crude treatment of women, anti-immigration beliefs, and relations with Vladimir Putin, Prime Minister of Russia. Read more about their similarities here.

Another article comes from the New York Times. This article focuses more on why Italians kept Berlusconi in office so long and why Donald Trump is more trusted by italians than any other european nation. It also brings a little more insight to italian politics quoting former Italian president, Carlo Azeglio Ciampi, who said: “Italians preferred to laugh at Mr. Berlusconi’s bawdy behavior than discuss the budget deficit.” Sound Similar? Read more about Silvio Berlusconi here

Overall  the majority of Italian students are liberal to the hard-left, similar to students all over Europe and North America. I’ve met students in my program from all over the world and hardly any of them are on the conservative side. Every country I’ve been to so far seems to favor “Not Trump.” From what I’ve gathered, Bernie Sanders was the choice a lot of europeans wanted, due to his socialist and similar values. While Hillary Clinton is not their first choice, they choose to back her knowing that America will be at least the step in the right direction, instead of a step towards mayhem; a radical leader who may worsen relations with countries around the world, worsen the refugee and crisis in the middle east, and one who doesn’t seem to know what he is doing.

Comments and corrections are appreciated and encouraged. If I misspoke, or you have an opinion, feel free to comment. Please no negative language or obscenities or your comment will be marked as spam and deleted.