Time is ticking. I have roughly 6 weeks left in Europe and only 3 more trips in the work with the possibility of a few day trips.

So, right now I’m in Poland. It is always nice getting out of Italy, and I start to forget the annoying ways of Italians. Poles still have some lazy qualities, but at least they aren’t exaggerating their emotions all the time.

Krakow is known for a few things, but most famously is known for Auschwitz, one of the largest German concentration camps ran during the holocaust. It’s located about an hour and a half outside the city, we booked a tour (Cracow city tours) that had all-inclusive transportation, entrance, tour guide, and even lunch. The camp auschwitz was still mostly in-fact, Birkenau –the  largest concentration and death camp– was mostly in ruins. We heard about the how the nazis deceived their prisoners every step of the way until the cyclone-B was dropped. We saw the actual hair of prisoners, shaved and taken from them to make textiles. We looked at the photos of prisoners they registered; faces all carrying similar and dark features. We held each other and thought about Donald Trump. A lot.

These are the pots and pans brought by those who thought they were coming to start a new, and better, life.

This place made us feel a lot of things. Yes sorrow for the past and the innocent deaths, but also fear and wonder of what the future holds. This camp serves as a reminder of history, and that we cannot let this happen again. It was a heavy week. We wondered if such rounding up of a certain race could ever happen again. Would the media report? Would people know and protest? We saw this hook on the streets of the camp. Our guide explained that as punishment, people’s arms would be bound behind them and hung by the hook. This would break their scapulas, which would make them unfit for work and sent to the gas chamber. We saw an older man wrap his finger around the hook and take a photo. It was the most disrespectful thing I saw all day. Tasteless. Infuriating. How could someone mock a death sentence so casually? This brings up a lot of ethical arguments, questions, and issues. That is what the exhibition is for: to make us think.

Memorial dedicated to those who lost their lives in the camp.

Now that the heavy stuff is setting in, we can drown our sorrows in some good ole polish Wodka. I didn’t get a chance to go on a pub crawl or go to a wodka tasting (food poisoning, very fun), but I did get to try some honey lemon vodka. Usually I think vodka tastes like straight up paint thinner, but this stuff was “sipable”. It didn’t make me cringe, I thoroughly enjoyed it.

I explored krakow a bit with some friends from my Erasmus program. We shopped around and visited the wieliczka salt mine. There are several markets around the city, both in the main square and the Jewish quarter. Lots of little trinkets with Russian influences and lots of warm socks and hats, mittens, and more. Besides typical souvenir things like magnets and keychains, I saw cute little wooden boxes all about and lots of polish pottery.

The salt mine was real neat, not cold inside so perfect for a winter weather day. We were extremely impressed with how big it was. Caverns so large you can hold a wedding or go bungee jumping. There were a lot of sculptures made out of blocks of salt (who could have though?) and we got to taste some of the wall. Very salty, but with some sort of mineral-ly twist. 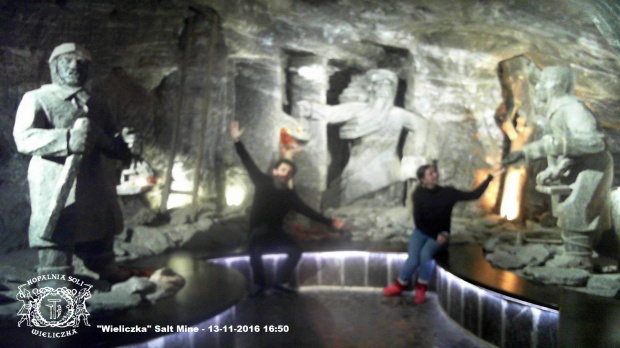 Super Blurry souvenir pic we got from the Salt Mine. Maybe a layer of salt on the lense??

Krakow has been good, although my Ryanair flights have been a little rough. Too bad the train can’t get me back to milan in an hour and a half. Oh well for now!

Bonus! Did I mention it snowed? It was my first european snowfall and I could not have been more ecstatic. Did you know that I only knew snowflakes were real until I went to Chicago during winter last year? Yes it’s unfortunately true. I was awestruck! See in Texas we usually only get sleet, basically frozen rain, so snowflakes don’t exist. For a Texan, real snow is a real treat.

Selfie in the Polish Snow!