I spent a weekend exploring the Emilia-Romagna region of Italy. I went to Bologna and Rimini, and neighboring city-state (country) of San Marino. It was a wonderful time! I find that the more I explore Italy, the more I like it. I’ve realized that the north of Italy just isn’t my style. I think of Milan as the New York City of Italy: everyone dresses in black, biggest subway system in the country, people are a bit on the rude side, crowded, expensive, fashion, etc etc. I didn’t much like NYC when I visited, so getting out of Milan and around Italy has been good for me.

I really liked this region, at least the places I visited. I visited a couple weeks ago, when most of my american friends were celebrating Thanksgiving and the start of the shopping season. I spent a day in Bologna, eating, and walking around. Italy has black friday sales, and so of course, I shopped around a bit. I was with this girl from my school, a chinese girl name Lu. We had booked a hostel in Rimini for 2 nights since it was a bit cheaper than in Bologna.

Bologna is the food capital of Italy, so of course I had to try some of the famous Tortelloni.

The day we went, there was a national strike, so we had to take the freccia trains at their higher cost to get to Rimini. We took the frecciabianca and it was a nice hour long trip. We got to the hostel to find it almost completely empty. Winter/fall is the dead season, as Rimini is a coastal town known as the “Italian Riviera.”

Walking around we could definitely tell it was meant for summertime fun. The coast was full of beach areas, where you could pay to get an umbrella, shower off, and eat. All of them were closed, with the exception of a few restaurants. It made getting to the sea fairly easy. Walking down the coastline was really nice, and unlike other italian beaches I’ve experienced, there were a lot of shells here. I collected and brought home quite a few. Even at this time, the beach wasn’t dead. There were tons of people taking “una passeggiata,” or a stroll, down the water. The weather didn’t even feel that chilly, it was nice, but still jacket weather.

Looking down the coast in Rimini

We spent one of our days exploring the city-state San Marino, which was a 50 minute bus ride from the Rimini train station. I think we chose a great time to come because there were very few tourists, which made our stay extra enjoyable. I read about how San Marino can sometimes be too touristy, but our experience was just right. Not everything was opened, but we still went shopping, saw the main sites and museums, climbed the towers, and did a mini hike. Definitely a great day trip! I even sent postcards using the San Marino postal service, I’m hoping it is more reliable than the Italian one. 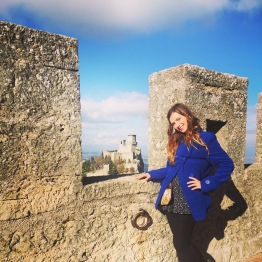 Our last day we spent wandering around the Rimini city center. We had already traversed some of this path before, trying to find a restaurant to eat at. The city center was full of people, but still didn’t feel crowded. The streets were lined with christmas lights at night and it was absolutely gorgeous.

Rimini’s old town has a few key attractions namely, the Augustus Arch, The Ponte Di Tiberius, and the Surgeon’s house. The arch and bridge are on opposite sides of the city so makes for a good walk. The surgeon’s house is cool, there are ruins from ancient times and you’ll even be able to see a few skeletons. Mhmm very cool. The ticket for that got us into the City Museum, but I wouldn’t recommend it unless you have a bit of time to kill. It’s like every other museum in Italy and we just wandered until we were bored. 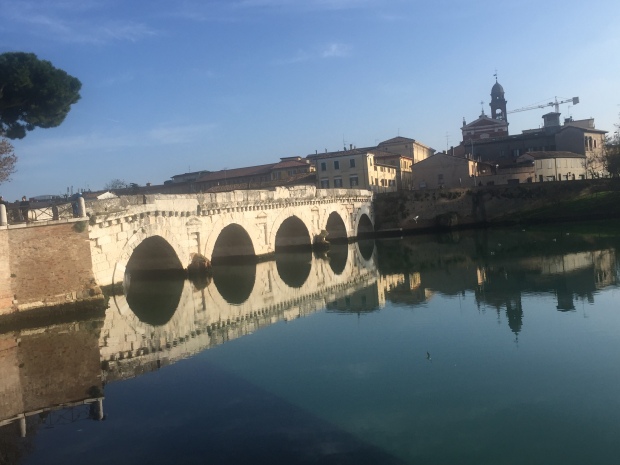 The Ponte Di Tiberius. The Romans were able to build this bridge to capture the perfect reflection of the arches on the water.

Overall the atmosphere of the city felt so much more relaxed in comparison to uptight Milan. People were smiling everywhere, full of energy. People were willing to help you, and not just because they wanted your tourist money. I felt they were truly genuine. It was a great change of pace. Since the city was in its dead season, people probably were happy that their city wasn’t overrun with tourists and beach bums. It felt like a place to live, and not just a place you could visit.

I spent a bit of time looking what there was to do in Rimini in the winter. While there is not a whole lot of touristy things to do, I enjoyed walking around in the park and talking to people. I met a few italians or italian-speaking folk in the hostel, and I even learned the cyrillic alphabet. Would I recommend going? Yes! It is still a beautiful city in the winter, and doesn’t have that touristy vibe. There are several day trips you can make from Rimini, good food, and the ability to get away from the hustle and bustle of a huge city. I think it definitely captures that romantic italian vibe, without all of the stress of people everywhere and the pressure to visit things. 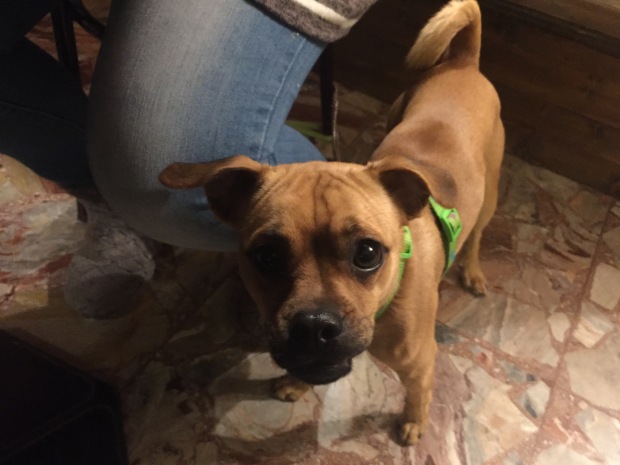 The hostel dog! My new friend, Spidey. One of the most energetic dogs I have ever met.